Skip to content
The modern city at Libeskind residence
Works on paper by great Italian artists of the 20th century, on view in the penthouse of the architect at CityLife - Curated by Irina Zucca Alessandrelli
DOWNLOAD PRESS
SHARE 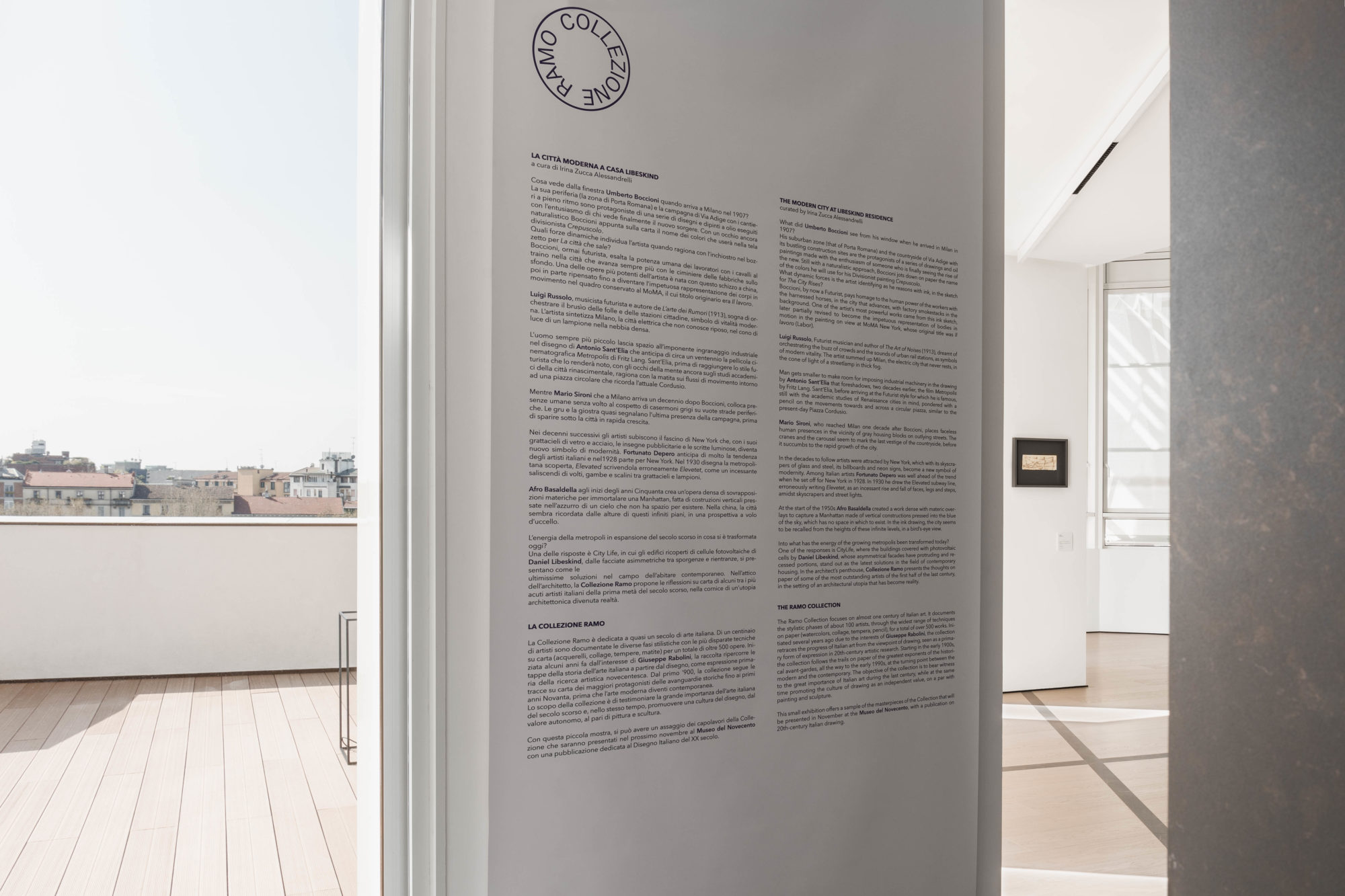 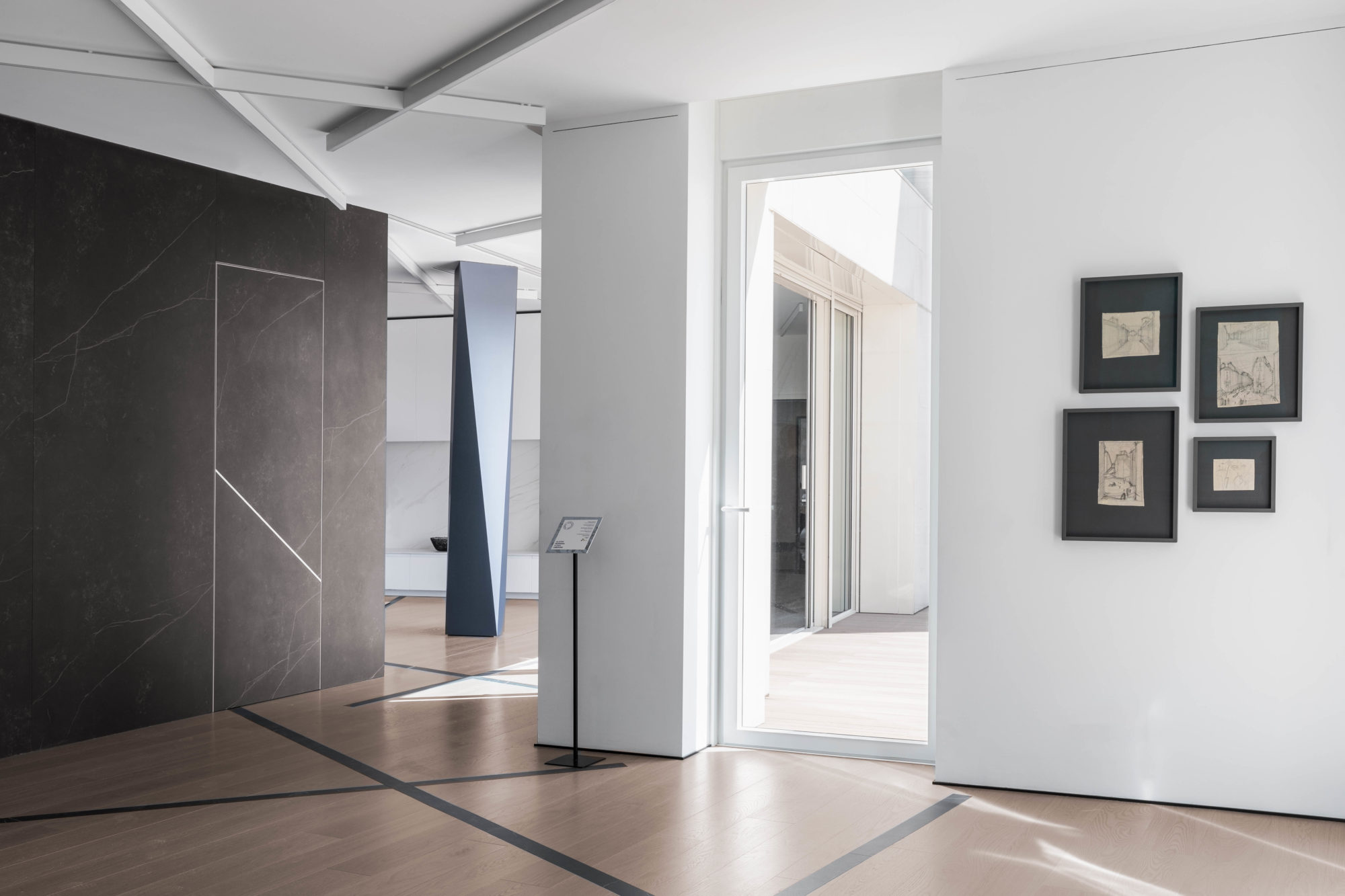 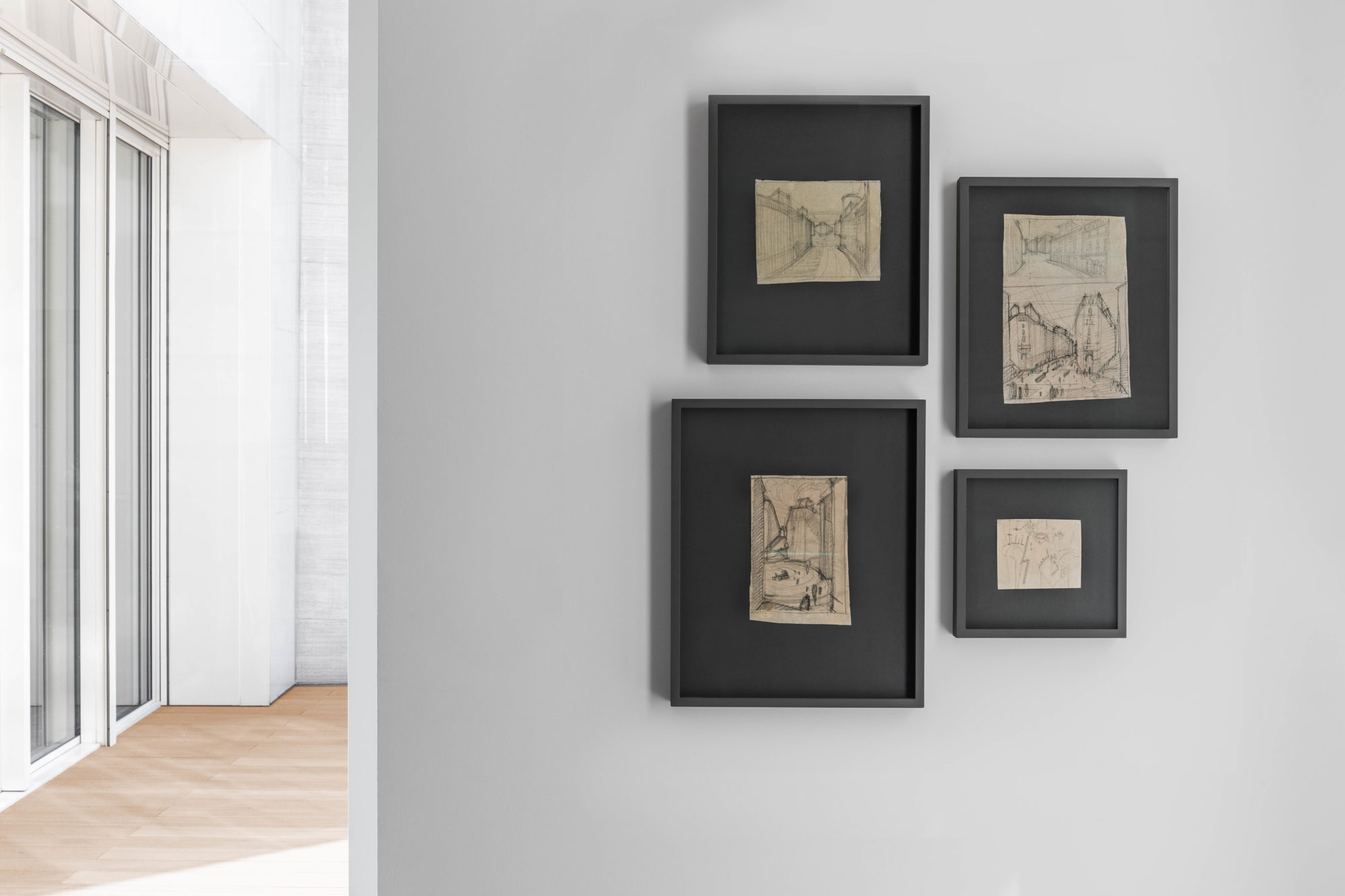 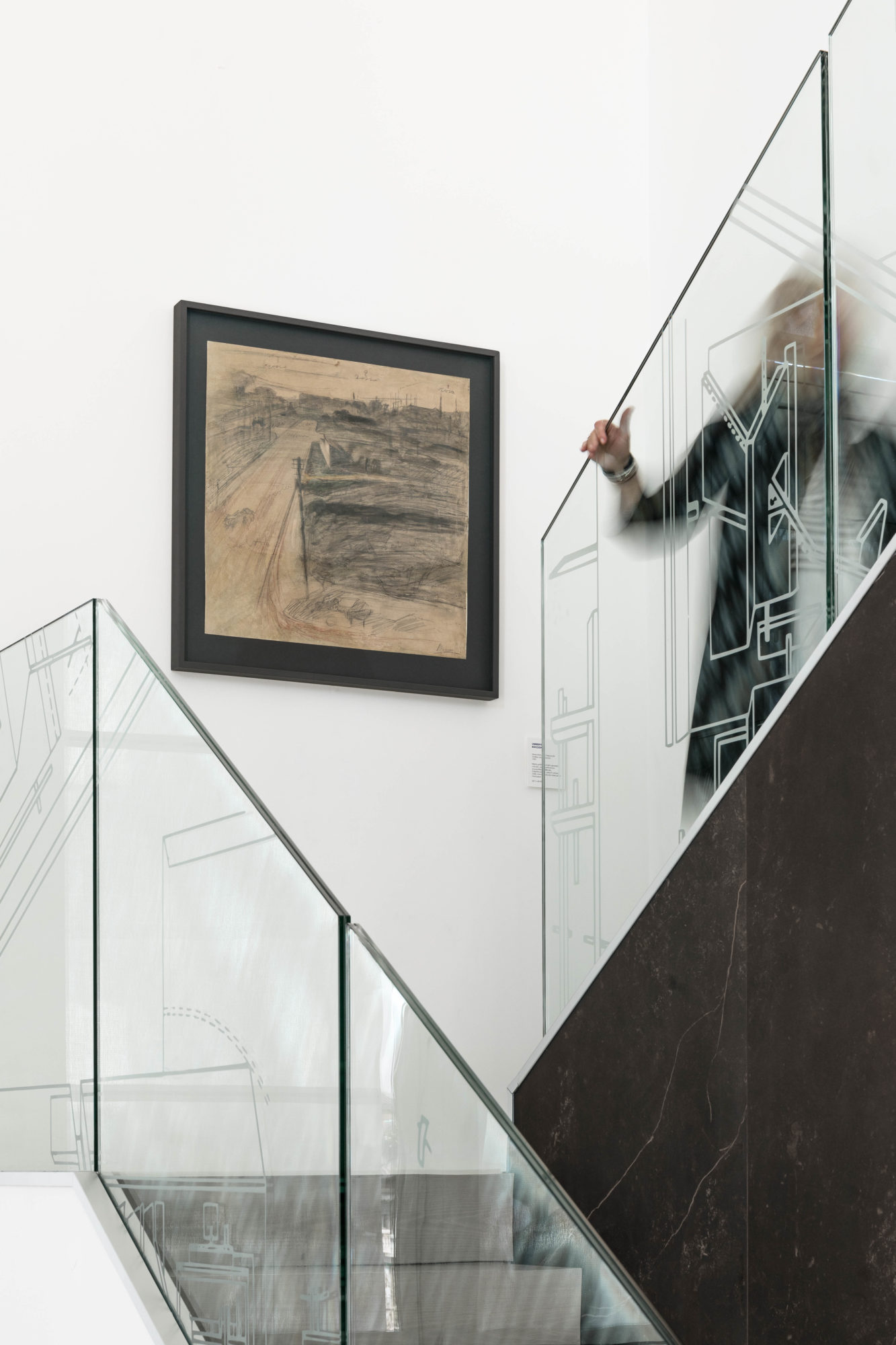 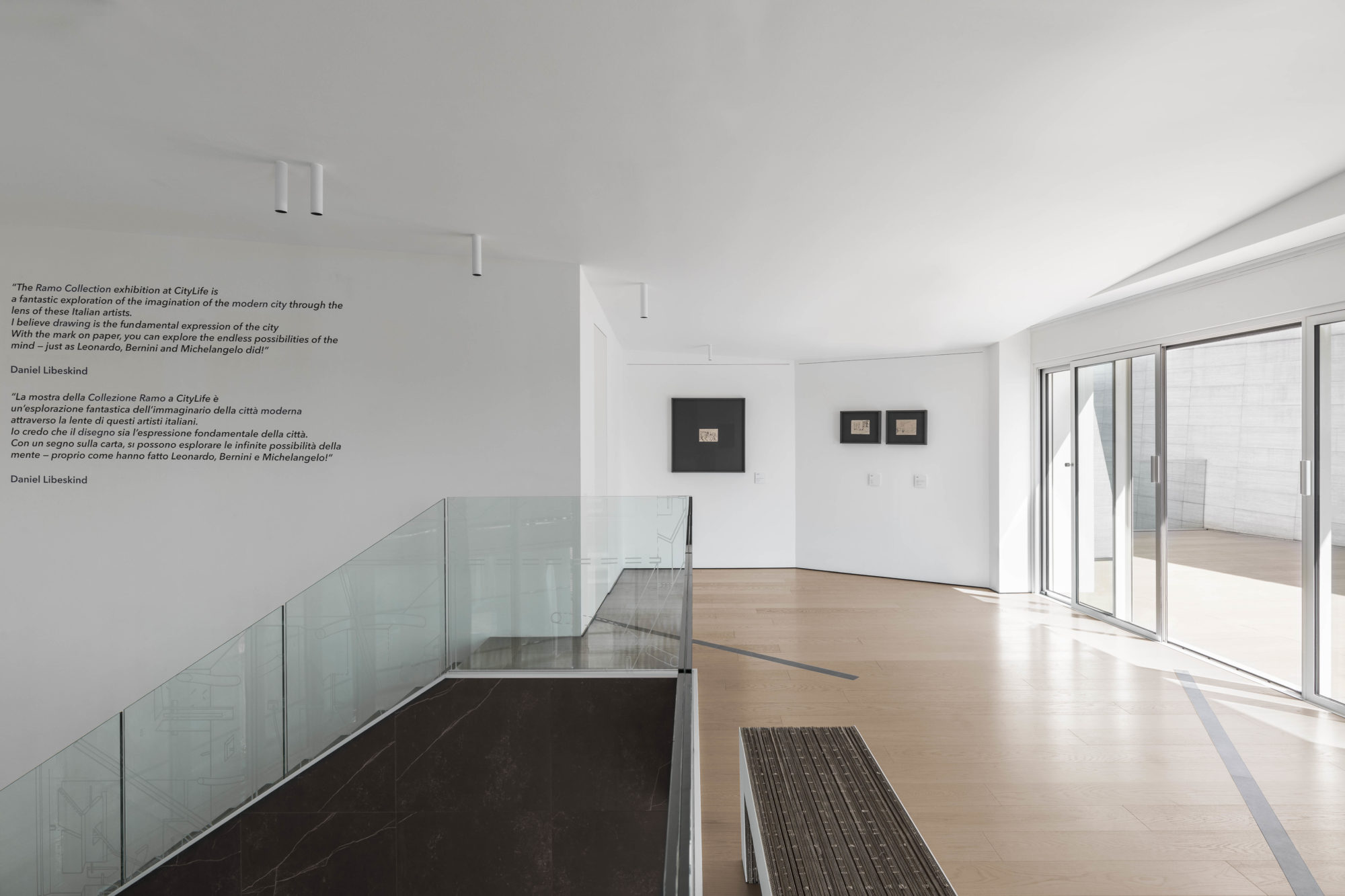 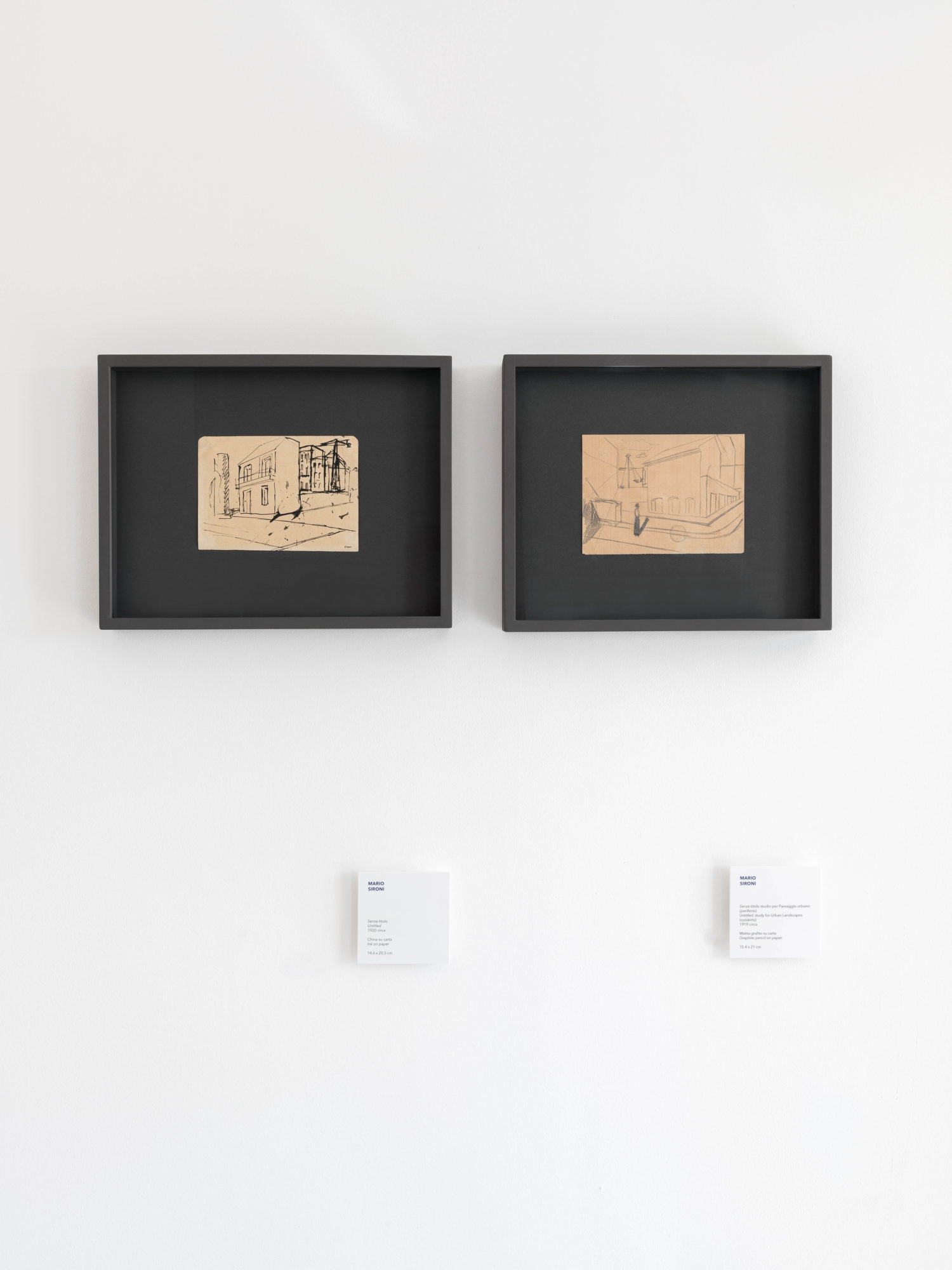 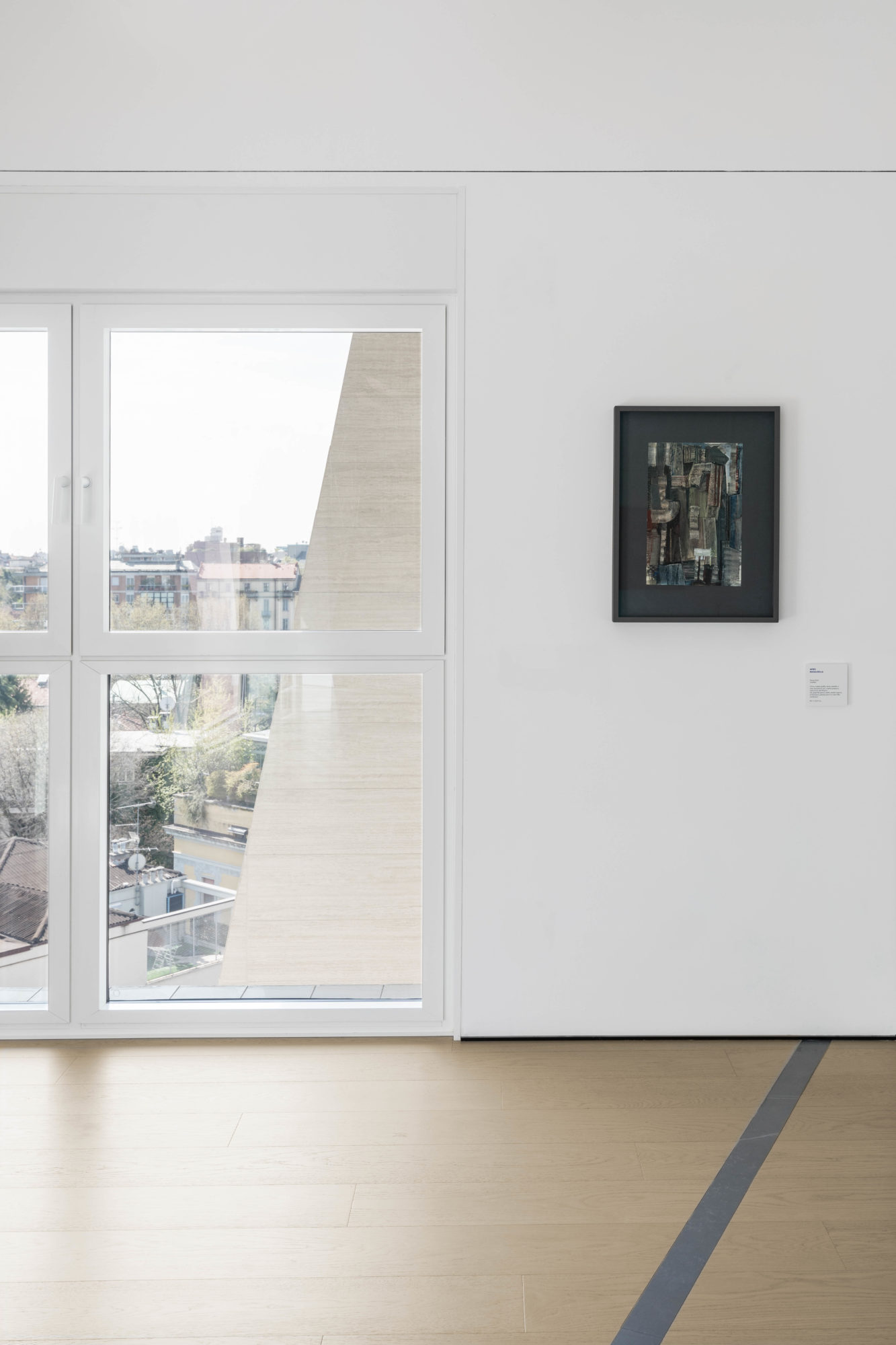 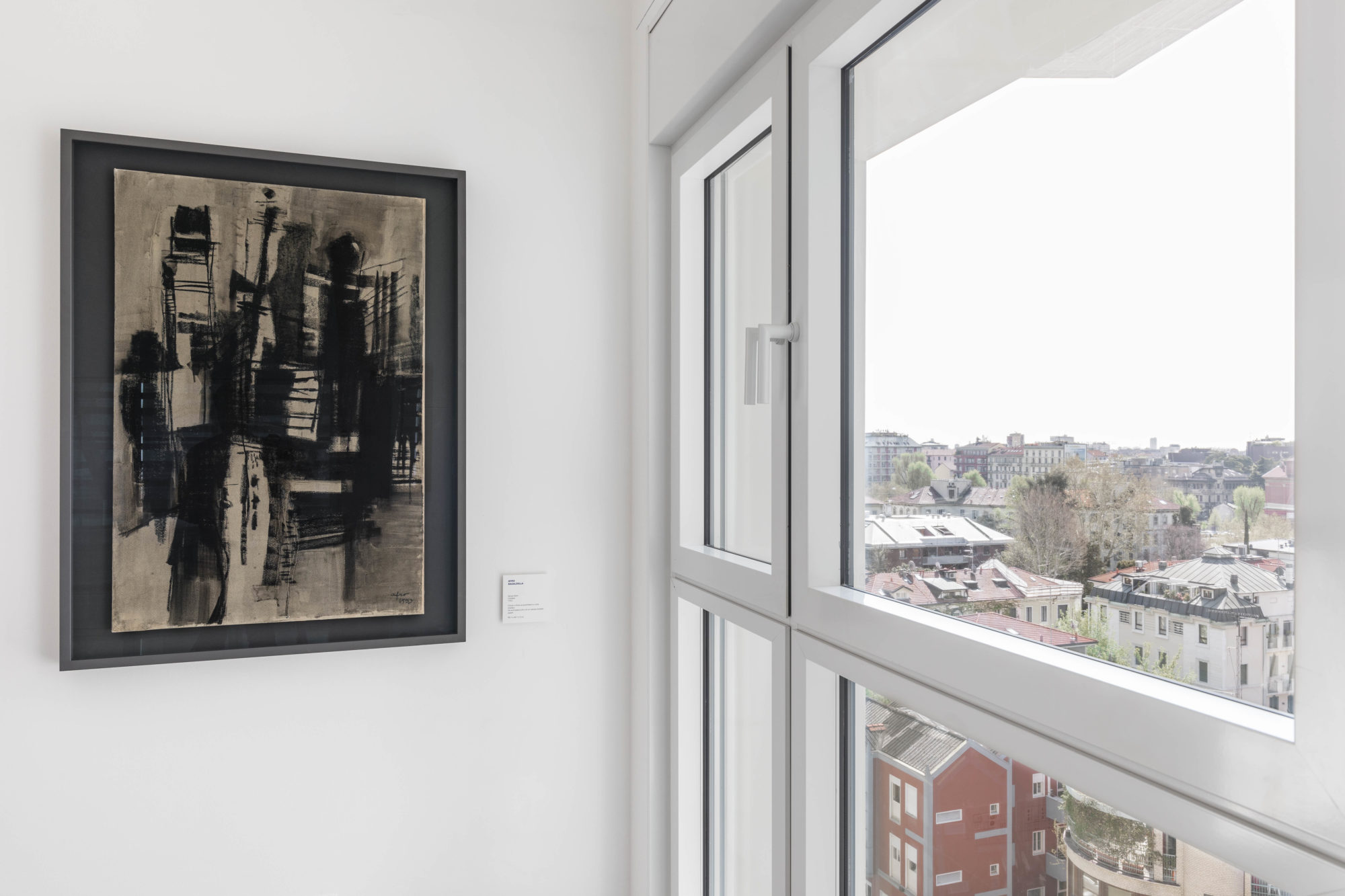 What did Umberto Boccioni see from his window when he arrived in Milan in 1907? His suburban zone (that of Porta Romana) and the countryside of Via Adige with its bustling construction sites are the protagonists of a series of drawings and oil paintings made with the enthusiasm of someone who is fnally seeing the rise of the new. Still with a naturalistic approach, Boccioni jots down on paper the name of the colors he will use for his Divisionist painting Crepuscolo. What dynamic forces is the artist identifying as he reasons with ink, in the sketch for The City Rises? Boccioni, by now a Futurist, pays homage to the human power of the workers with the harnessed horses, in the city that advances, with factory smokestacks in the background. One of the artist’s most powerful works came from this ink sketch, later partially revised to become the impetuous representation of bodies in motion in the painting on view at MoMA New York, whose original title was Il lavoro (Labor). Luigi Russolo, Futurist musician and author of The Art of Noises (1913), dreamt of orchestrating the buzz of crowds and the sounds of urban rail stations, as symbols of modern vitality. The artist summed up Milan, the electric city that never rests, in the cone of light of a streetlamp in thick fog. Man gets smaller to make room for imposing industrial machinery in the drawing by Antonio Sant’Elia that foreshadows, two decades earlier, the flm Metropolis by Fritz Lang. Sant’Elia, before arriving at the Futurist style for which he is famous, still with the academic studies of Renaissance cities in mind, pondered with a pencil on the movements towards and across a circular piazza, similar to the present-day Piazza Cordusio. Mario Sironi, who reached Milan one decade after Boccioni, places faceless human presences in the vicinity of gray housing blocks on outlying streets. The cranes and the carousel seem to mark the last vestige of the countryside, before it succumbs to the rapid growth of the city. In the decades to follow artists were attracted by New York, which with its skyscrapers of glass and steel, its billboards and neon signs, become a new symbol of modernity. Among Italian artists Fortunato Depero was well ahead of the trend when he set of for New York in 1928. In 1930 he drew the Elevated subway line, erroneously writing Elevetet, as an incessant rise and fall of faces, legs and steps, amidst skyscrapers and street lights. At the start of the 1950s Afro Basaldella created a work dense with materic overlays to capture a Manhattan made of vertical constructions pressed into the blue of the sky, which has no space in which to exist. In the ink drawing, the city seems to be recalled from the heights of these infnite levels, in a bird’s-eye view. Into what has the energy of the growing metropolis been transformed today? One of the responses is CityLife, where the buildings covered with photovoltaic cells by Daniel Libeskind, whose asymmetrical facades have protruding and recessed portions, stand out as the latest solutions in the feld of contemporary housing. In the architect’s penthouse, Collezione Ramo presents the thoughts on paper of some of the most outstanding artists of the frst half of the last century, in the setting of an architectural utopia that has become reality. 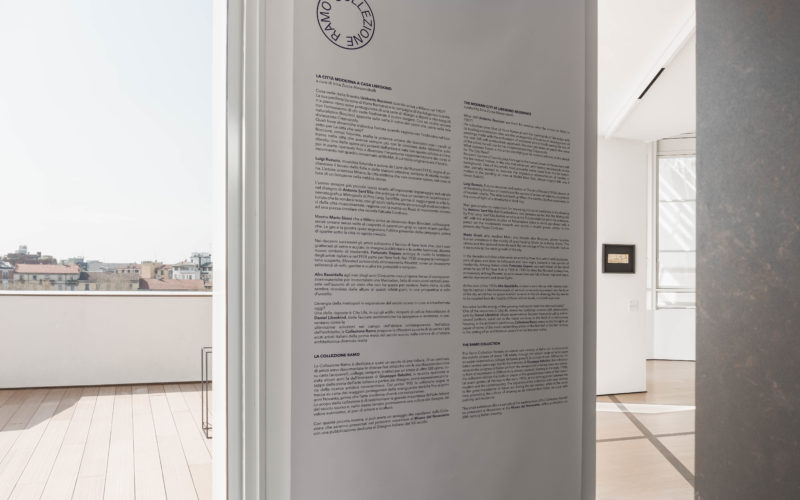 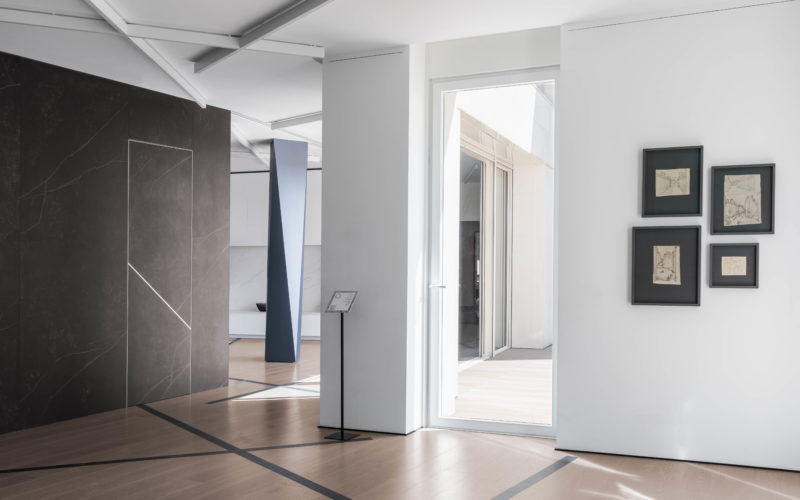 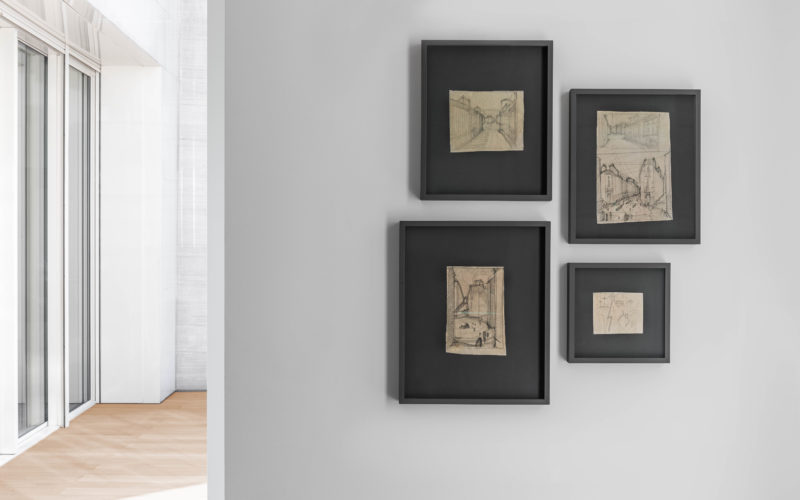 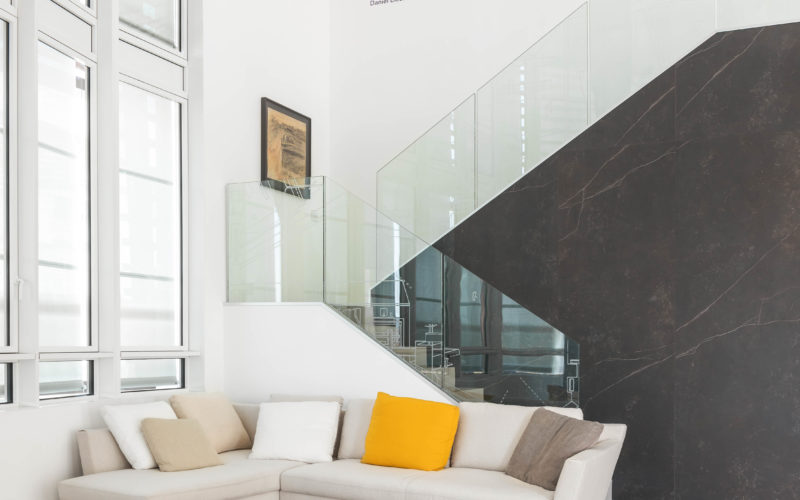 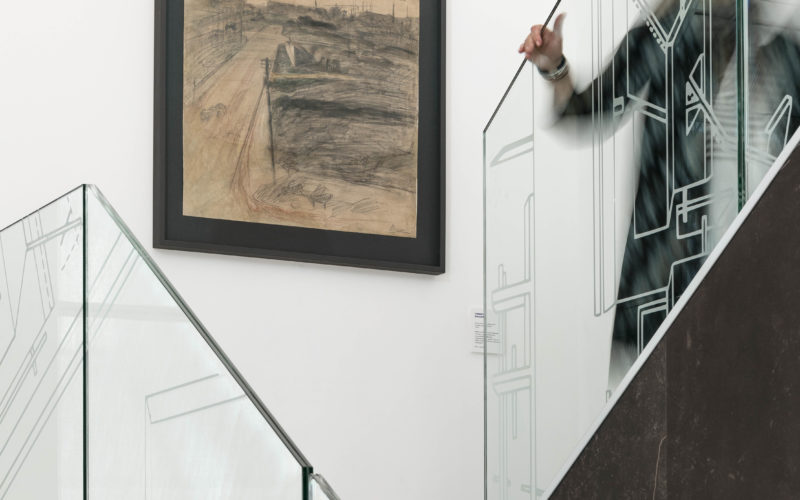 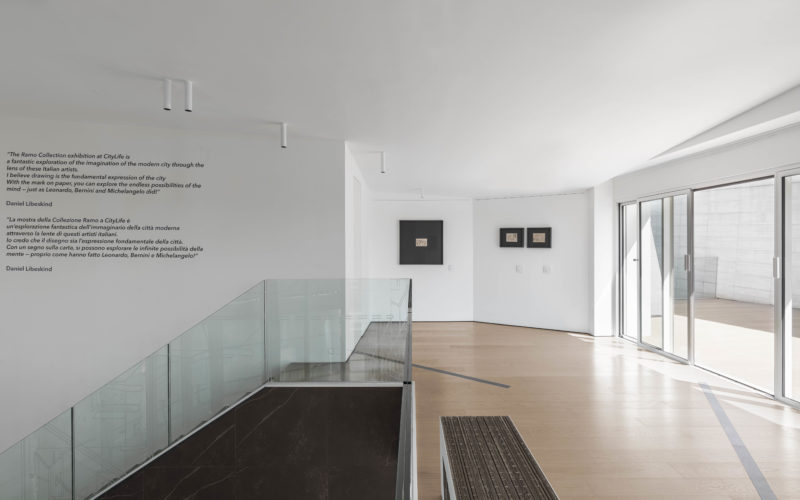 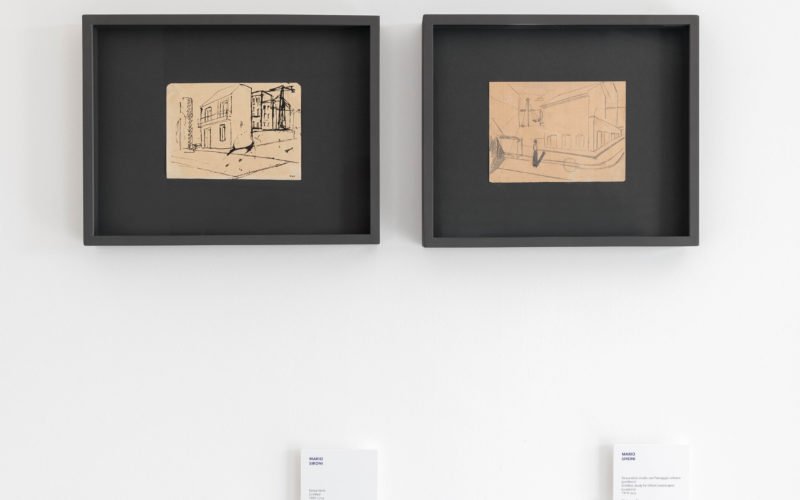 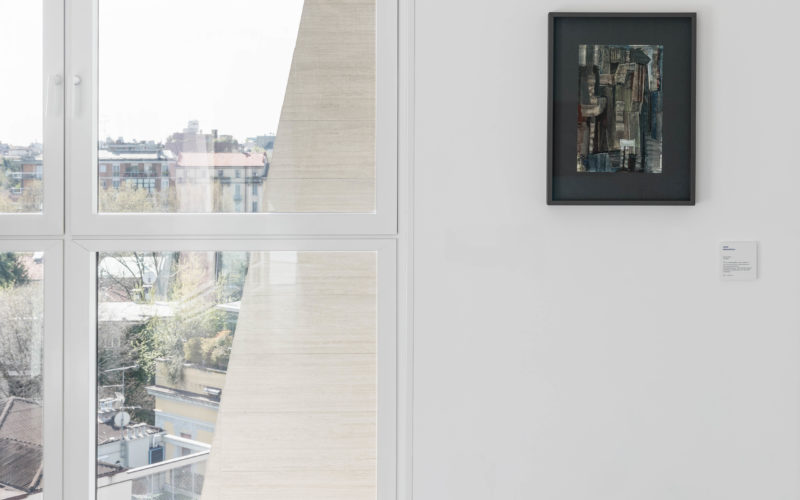 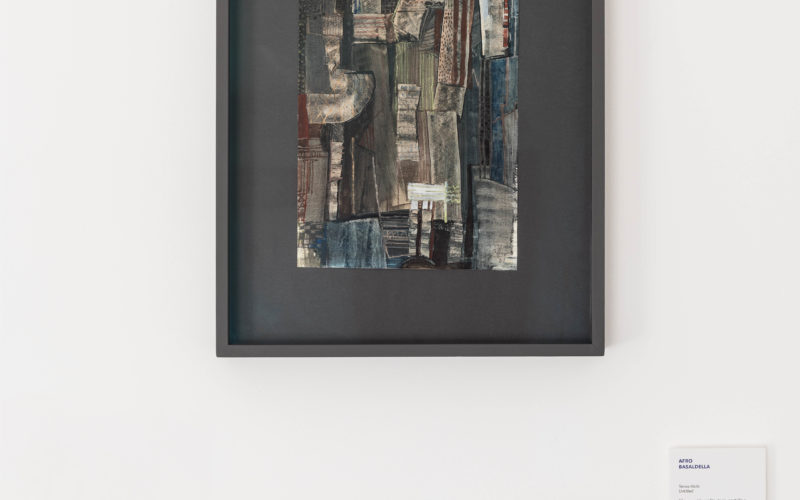 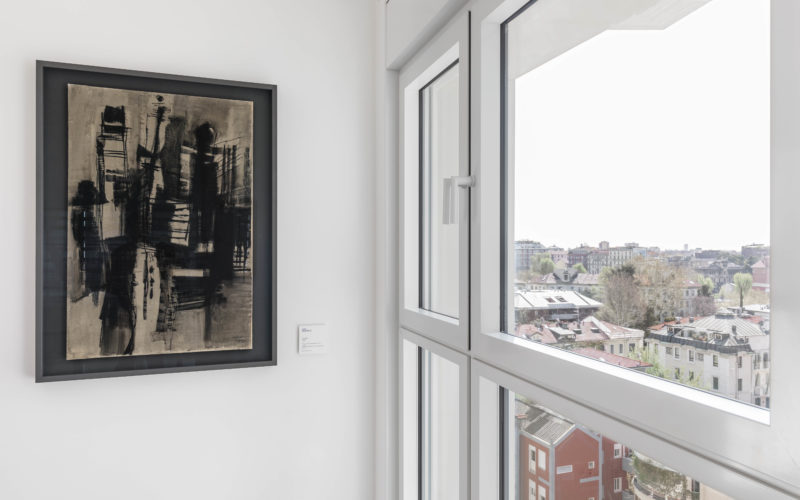